Written by Jack
Updated over a week ago

Use CSV import to create a large number of users and assign them to groups in a single action.

To create the CSV file, first open up Microsoft Excel, create a blank workbook, then click File -> Save As…, and change the file format to Comma Separated Values (.csv). You’re free to name the file whatever you want before saving. 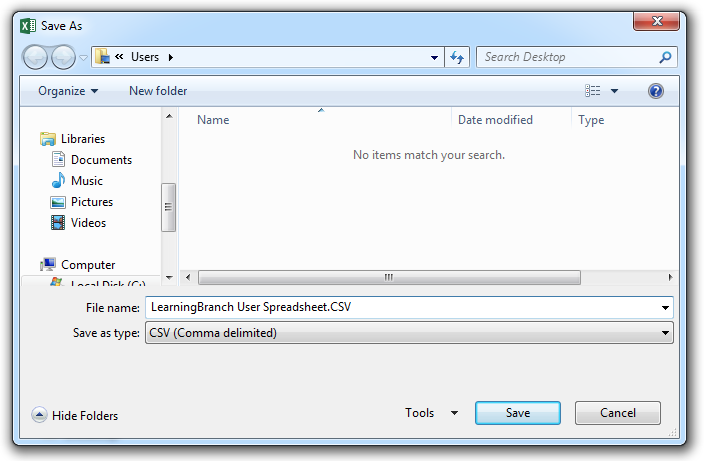 If the data in your CSV needs special characters, like French accents or Chinese characters, we highly recommend using an alternative spreadsheet program, such as Google Sheets. We have found that Microsoft Excel cannot consistently export CSV files with special characters.

In Excel, add these headers in the first row exactly as shown below:

These columns map to the fields in a user’s account – more about this in the next section.

In each row, enter the information for each user that you would like to create and add to a group.

Each row in the CSV must have user data in it. Don't leave blank rows in the middle of the document.

The fields are as follows:

Once you have completed entering the user information, save your CSV file.

On the Users Page, upload the CSV file with the import users button.

With CSV import, existing users can be added to new and existing groups.

In CSV import, users are identified by the email field.

To add an existing user to a group using CSV import:

If an email in the CSV matches the email of an existing user, the user will be added to the group specified in the CSV.

The existing user's first name, last name, role, and password will not be changed.

Checking if import was successful

If the CSV file has been uploaded and there weren’t any errors, you can double check that the users you created show up on the Users page.

And that the groups you created are all on the Groups page:

To be sure that your import was successful, we strongly recommend that you try logging in as some of your newly-created users.

Did this answer your question?